Bangladesh@50: From a ‘basket case’ to a case study, how the country put itself on the fast track

History has proven the former US Secretary of State Henry Kissinger’s famous description of the infant state of Bangladesh in 1972 as an “international basket case” wrong. Bangladesh has twice declared Independence — once as part of Pakistan in 1947 and then again as the current nation in 1971. On both occasions, it was considerably worse off in economic terms. Yet, it is to its credit that as things stand today — the past 15 odd years being the key — an average Bangladeshi’s income is more than that of an average Pakistani or even an average Indian.

That is not to suggest that Bangladesh’s overall gross domestic product (GDP) is more than either of the two “parent” countries; in 2020, it was 83 per cent of Pakistan’s GDP and just 11 per cent of India’s. But faster annual GDP growth rates, lower overall population and equally crucially, slower population growth rates — over the past 15 years, its population growth rate has been lower than India’s (18.7 per cent to India’s 21 per cent from 2005-20) — have meant that its per capita GDP is now the best among the subcontinental nations.

Beyond these macro numbers, there are significant ways in which Bangladesh’s economy has excelled. Unlike India, which went from being a predominantly agrarian economy to a service-sector dominated one, Bangladesh has been successful in developing and sustaining a booming industrial sector. A key element was to adopt labour laws that incentivised the creation and functioning of large firms. This has allowed it to pull millions out of farms and provide better-paying industrial jobs. In particular, Bangladesh has specialised in garment manufacturing and become a key global player in garment exports, competing with the likes of China and Taiwan, while leaving India and Pakistan way behind. 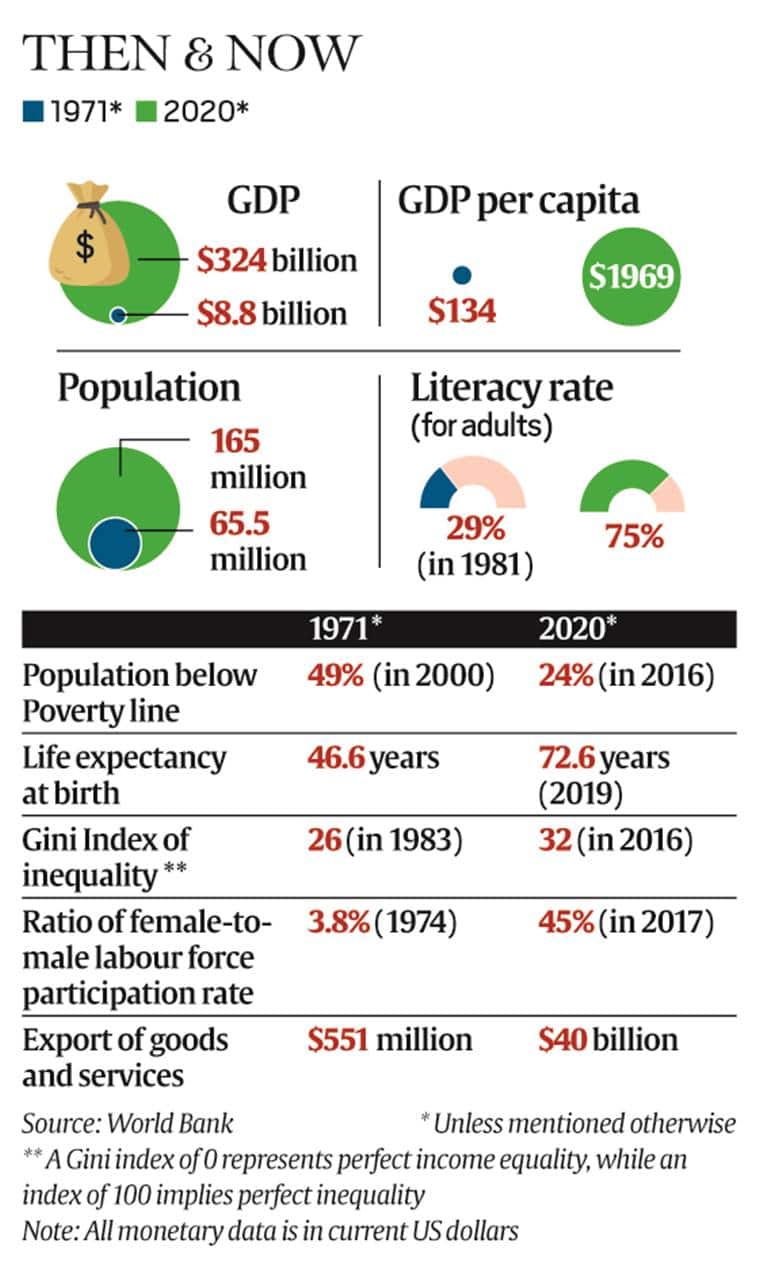 What has made Bangladesh stand out further are the improvements in social and human development parameters, such as health, sanitation, financial inclusion and women’s political and economic status. For instance, the World Economic Forum’s (WEF’s) Global Gender Gap Report (2021) ranks Bangladesh at 65 among 156 countries, up from its 2006 rank of 91. India ranks at 140, lower than its 2006 rank of 98. Women have played a pivotal role in Bangladesh’s turnaround. The female participation rate in the labour force is close to 40 per cent — much higher than India’s (at 22.3 per cent).

In the UNDP’s Human Development Index 2020, Bangladesh is just a couple of ranks below India but it is crucial to note that its trajectory is quite different. While India’s score and ranking have been stagnant, Bangladesh has been improving fast. For instance, between 2014 and 2019, India’s HDI ranking improved by one and Bangladesh’s by eight. While it marginally
loses out to India in educational attainment, it zooms past when it comes to health and nutrition metrics. Life expectancy at birth is 72.6 years — three years more than India’s.

Moreover, it is ranked much higher (76) than both India (101) and Pakistan (92) on the Global Hunger Index. When it comes to the proportion of undernourished population or prevalence of wasting in children, its scores are half of India’s levels.

However, there are massive economic and social challenges ahead. Bangladesh still has high levels of poverty — it was over 20 per cent in 2019, according to the Asian Development Bank figures. It is also plagued with wide inequalities. The bottom 50 per cent only account for 17 per cent of the national income while the top 10 per cent corner 43 per cent of it, according to the World Inequality Report 2022, released last week. It also scores very poorly on corruption — Transparency International Corruption Perception Index ranks it 146 of 180 countries in 2020, much worse than India (86) or Pakistan (124).

In the ultimate analysis, what will determine the continued improvement in the socioeconomic parameters of Bangladesh will be its commitment to deepening democratic principles and steering clear of majoritarian and totalitarian tendencies.