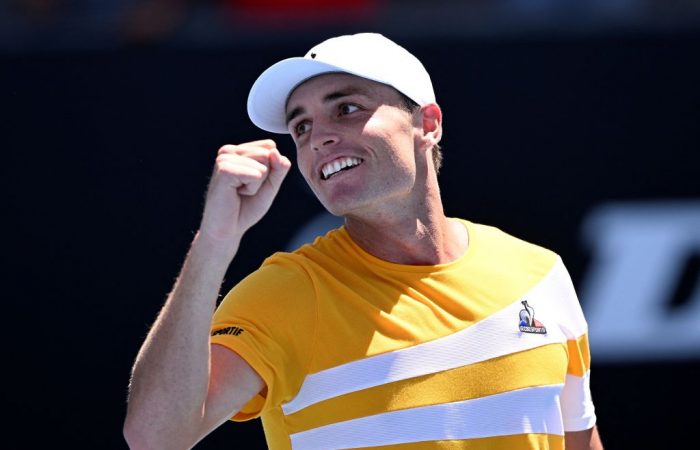 From cleaning boats to the third round of the Australian Open. It’s fair to say it’s been a challenging journey for Australia’s Chris O’Connell as he prepares for the biggest match of his career.

The 27-year-old has had to travel the long road, with persistent injuries holding him back earlier in his career.

But with a stunning second-round upset over Grand Slam semifinalist Diego Schwartzman of Argentina at AO 2022, the world No.121 Australian is quickly making up for lost time.

“It’s the best feeling I’ve ever had on a tennis court. I’ve been playing tennis since I was four. To have moments like this, it’s a dream come true,” O’Connell said after the biggest victory of his career.

O’Connell made his Australian Open main draw debut in 2017, but was soon struck down by pneumonia, and a return of the knee tendonitis that had plagued his early progress from juniors.

Whenever O’Connell neared a return, the tendonitis would flare up. It forced a break from the tour at the start of 2018, largely to mentally recharge.

For the next six months, O’Connell was cleaning boats at the Quays Marina in Sydney with his brother.

“I decided to clean boats because I was so sick of being injured. I just didn’t want to be on a tennis court,” O’Connell told The Age in 2021.

“My brother had a job there, so I just joined him, and it was pretty relaxing, just being on the water and cleaning boats.

“Even though the pay wasn’t as good as it would be being a tennis coach, it was quite relaxing for a few months doing that while I got the body right again.”

Wildcard Chris O’Connell scores his first top-20 win over world No.13 Diego Schwartzman to reach the third round in a Grand Slam for the first time ?#GoAussies • #AO2022 • #AusOpen pic.twitter.com/iCoLkaM9vV

It would take a while for the results to come, with O’Connell’s ranking dropping outside the world’s top 1000.

But 2019 saw a sharp rise and he was back for a second Australian Open main draw appearance in January 2020, taking a set off Daniil Medvedev in the process.

By the end of that year, O’Connell had a maiden Grand Slam main draw victory, coming over Laslo Djere at the US Open, and his ranking restored to world No.120.

“I knew I had good results in me. But the biggest thing for me is just staying healthy, not having these injuries where I miss two months of tournaments.” O’Connell reflected this week.

Another main draw victory came over Jan-Lenard Struff at Australian Open 2021, before an ankle injury, osteitis pubis and eventually COVID played havoc with the remainder of his season.

“I nearly missed five or six months last year. I can’t be doing that,” said the Sydneysider.

“The belief is always there, but I just need to make sure my body’s healthy this year. I want to play a full year first and foremost.”

Former World No.39 Marinko Matosevic has been O’Connell’s coach for just over a year, and the New South Welshman reflected on the important role he has played in his path to today.

“The process didn’t start yesterday. It’s been happening all of last year. He’s just really confident with how I want to play tennis now,” O’Connell explained.

“It’s the first time I’ve really had a one-on-one coach literally every day with me.

“I also did my pre-season with Al Murphy from Tennis Australia. He’s based up in Brisbane, but he came down and worked with me. He’s been great over December. I feel really fit and strong.”

O’Connell will take on big-serving Maxime Cressy in the third round, a 198 cm American who is currently ranked world no.70.

“He’s a completely different player to Schwartzman,” said O’Connell, who is facing Cressy for the first time.

“I played Isner in Atlanta last year and he’s a similar player, so it’ll be an interesting match.”