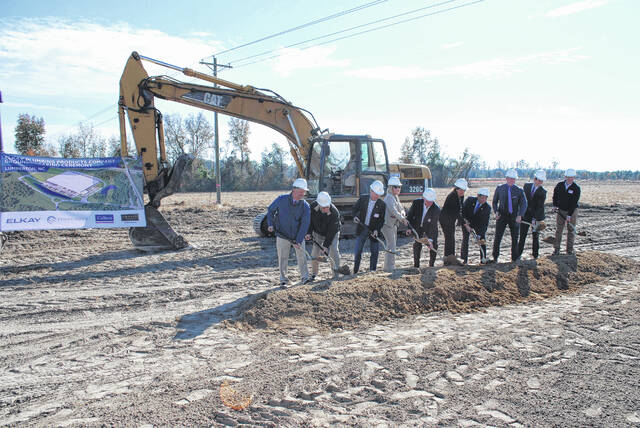 LUMBERTON — Ground was broken Wednesday at the site of the proposed distribution center for Elkay in the Lumberton and Robeson County Industrial Park at U.S. 74 and Interstate 95.

Several officials including city council members, Robeson County commissioners and others like Robeson Community College President Melissa Singler attended the ceremony at the site of the proposed center. State Sen. Danny Britt and N.C. Rep. Charles Graham also were in attendance. The ground breaking ceremony came after a Tuesday announcement that Stonemont Financial Group had closed on the land needed in the project.

Kraig Kniss, vice president of Operations for Plumbing at Elkay, said the new distribution hub for the sink manufacturer would enable the company to fulfill two-day shipping across the U.S. The location between major highways also made the site ideal.

“We will continue to leverage the distribution of the product that we have,” Kniss said.

The warehouse and distribution facility is expected to be completed by October, according to Stonemont Financial Group, a real estate firm and the project’s developer. The building will be about 387,302 square feet.

Elkay has been operating in the city of Lumberton for more than 40 years.

The project is about a $40 million investment which includes machinery and the building, Jones said.

About 40 people will be employed there including some employees moved from the Caton Road facility, which will remain in operation, according to Ken Blazer, director of Elkay’s Global Distribution and Logistics.

“In order to support this expansion, we are moving our distribution function from the Lumberton facility to this new location, freeing up space for additional manufacturing capacity. Once the new distribution site is operational, we expect to be able to add manufacturing and distribution roles to our workforce to support our five-year growth strategy,” Blazer said in a statement in June.

Gov. Roy Cooper announced that Elkay Manufacturing would be the first tenant of the industrial park during a June 30 ceremony at Lumberton Regional Airport.

Sean McDonnell, senior vice president of Stonemont Financial Group, recognized efforts of organizations involved including Choate Construction, which will act as the general contractor for the project.

“Elkay team, we really wanna thank you guys. We’re very humbled to have the opportunity to work with ya and thank you for putting your trust in us. We really appreciate it,” McDonnell said.

Merriman Schmitt is the project’s architect and Thomas & Hutton the engineer consulting firm, according to Stonemont Financial Group.

“We are just looking forward to doing this many more times,” said Faline Dial, chair of the Robeson County Board of Commissioners.

“This is the best thing that has happened to Lumberton as far as industrial development goes,” Davis told The Robesonian before the ceremony, referring to the industrial park.

He recognized Lumberton city staff, city councilmen and Robeson County commissioners during the ceremony for their support and efforts in the project.

“Without them, this would not be possible,” Davis said.